I’ve actually been laying out the background for the Sundog novel (and by extension Frasgird) for several years. The multiverse/jitter cycle is an essential aspect of reality; in the novels, it helps account for the matter/anti-matter imbalance, for the non-uniform structure (supergroups of galaxies, etc.) in the universe, and quite likely for the Big Bang itself (though there’s no way of knowing that).

Here’s a sort of diagram (grabbed off the web) of the multiverse splitting due to quantum effects (time points up): 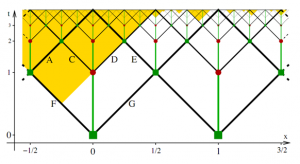 My idea (wholly invented) of the quantum jitters is that my ‘law of conservation of reality’ (also wholly invented) causes a regular collapse back to a vastly smaller number of parallel universes — basically, the diagram above but in the opposite direction. But that when this happens and you have, say, several trillion slightly different universes collapse back into one (before they start splitting again), there are disruptions that occur. The size and impact of the jitter depends upon the actual differences among the set of collapsing universes. If the differences are all at the quantum level, the impact is negligible. This happens constantly — it’s the ‘quantum heartbeat’ that I think I mentioned before.

But you also have universes that have macroscopic differences that collapse together as well. The greater the differences, the less frequent the collapses, but the greater the quantum ‘jitter’ effect. As technology gets more advanced, it becomes more sensitive to quantum jitters; thus, the multiverse/jitter cycle also helps explain Fermi’s paradox, namely that the high tech level required to build and operate hyperspace-capable ships gets regularly broken (haven’t picked a period, but maybe every 500 years or so), forcing a lot of tech infrastructure to be rebuilt from scratch. Some truly massive quantum collapses can cause abrupt climate change, evolutionary changes, mass extinctions, or even — as in the case of the first Sundog novel — entire planets to vanish.

My timeline is that a human civilization began to emerge about 100,000 years ago, during the last warm period before the most recent ice ages set in. 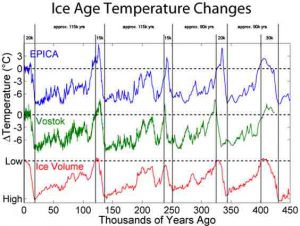 In particular, a group of humans were moved by a visiting alien race from North Africa/the Middle East to an uninhabited area in North America and ‘uplifted’ — given a bit of extra knowledge and primitive technology, as well as a set of carvings with ideas for future tech directions — as sort of a combined science project/performance art piece. They wanted to see how this group would differ from the rest of humanity at some future date. The aliens didn’t know that a new set of ice ages were about to start, but they would have probably considered that just an interesting twist on the experiment. The advance of the ice sheets on the North Americans continent forced this group of humans to focus on survival, but they did so via technology. The uplifting aliens never came back, having gone through some tech/climate problems of their own and forgotten their experiment/project.

From 13,000 to 12,000 BC, during a warming period after the last set of ice ages and a period without any major jitters, this North American group suddenly made a steep climb up the tech curve — helped in part by the clues and tech that had been passed down for millennia. They invented hyperdrive as well as green ice (jitter-proof stasis). They also invented a means of predicting major jitters. They saw that a significant (climate-level) one would happen within a decade or two, but that a truly massive one — one that could eliminate Earth itself — would occur in about 14,000 years.

Unsure of what technology would still be working after the near-term jitter, they started sending out ships to find other habitable planets. Their industrial base was limited, so they couldn’t send a lot out, not enough to create supportable colonies. But they did start hiding ‘green ice’ cryopods — usually with two husband-and-wife couples and a fair amount of tech inside — on these planets. The idea was to leave information about these cryopods on stable media (metal, stone) there at home, so that when the technology was in place again, these pods could be tracked down.

This effort continued from about 12,000 BC until 11,800 BC, when two things happened. First, another alien race — having captured one of the human ‘seed’ ships and traced it back to Earth — came to Earth and wiped out the civilization preemptively, taking pains to obliterate all civic and industrial infrastructure. (The aftermath of this attack was first detected in the early 21st century and was thought to be the aftermath of a massive impact event.) Then, in a bit of fortuitous timing, while the aliens were debating whether to come back and finish the job with all the non-advanced human groups on Earth, the jitter hit. This disrupted civilizations and technology throughout the galaxy and triggered large macroscopic climactic events. On Earth, this showed up as the Younger Dryas ice age, with massive global cooling that took place over the space of just a few years. (Most of the cooling actually took place in the space of a few minutes, but no future scientists could detect that and none would have believed it.) 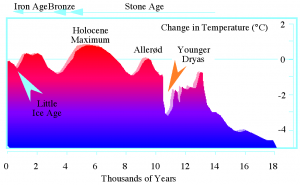 Inhabited planets through local space — those where intelligent species actually survived (some went extinct) — had to start the long, slow climb towards hyperspace travel again. On Earth, the stories from the few remnants of North America survivors — about wholesale destruction from on high of human and animal life and massive floods due to melting of ice sheets, and then a transoceanic migration from North America to other continents — became the basis of “flood” and “lost continent” stories throughout the world. And their warnings about a future massive quantum quake and the possible vanishing of the Earth became integrated into myths and religions worldwide as well.

And that takes us back to the excerpts that I posted on the website: http://frasgird.com/sundog-frozen-legacy-excerpts/

Webster has been doing game design since 1980, but only has one actual published game to his credit -- Sundog: Frozen Legacy (Apple II, 1984; Atari ST, 1985). This is his second. View all posts by Bruce Webster